In this release Ubiquity have focussed on improving the Survey module in Engage and are continuing the expansion of Transactional Databases by implementing the ability to filter on transactional data.

There are also many interface tweaks and bug fixes.

You can now filter on transactional data.

Filtering on transactions works slightly different to standard filtering as each contact can have multiple transactions. This also means there are extra options for performing calculations on those transactions when filtering.

Calculations that can be performed are: Sum, Average, Count, Maximum and Minimum. Which options will be available depend on the type of field that you’re applying the calculation to. 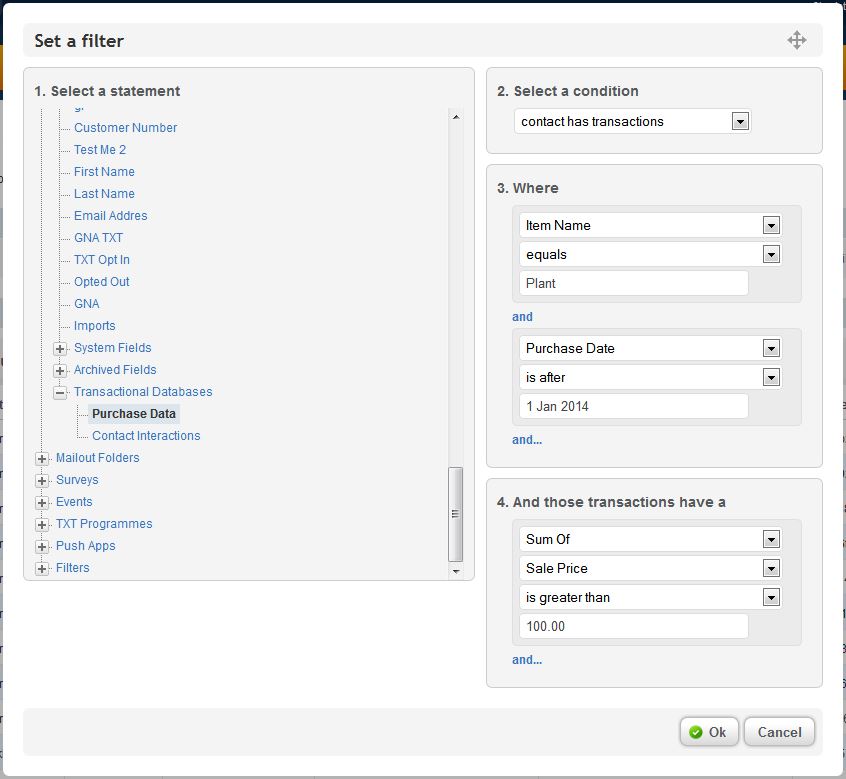 First you select the transactional table that you want to filter on, then you can add multiple filter conditions for transactions that the contact must have in order to match the filter.

One of the biggest changes to Survey in this release is same page survey logic.

This means that you can add logic to show a question, or make a question mandatory, based on another question on the same page.

To make this work Ubiquity have made a distinction between page logic and question logic.

Page logic refers to logic applied at the page level, such as the movement of a respondent between pages and includes conditions such as “Move to another page”, “Survey is complete” etc. This should be added in the pre and post logic sections.

Question logic refers to logic applied to individual questions, such as the visibility or mandatory status of an individual question. You can now add logic directly to a question in the “Edit Question” dialog, rather than in the pre- and post-logic sections. For backwards-compatibility it is still possible to add question logic via the pre- and post-logic sections.

Question logic can be seen against the related question in the designer so it’s easy to make sure you’ve got the logic right.

Questions being shown or made mandatory will now work if the questions referenced in the logic are on the same page, a different page, or a combination of both.

Note that showing and hiding based on questions on the same page does rely on the user having JavaScript enabled in their browser. If JavaScript is not enabled the respondent will see a message at the top telling them that the survey cannot be personalised unless they turn JavaScript on. This message can be customised in the layout.