This release has been pulled forward by a week due to the Easter holidays. As such this release is mostly a maintenance release, focussing on bug fixes and performance improvements.

As of this release Internet Explorer 7 (IE7) has been removed from the list of supported browsers for Engage.

Older browsers such as IE7 don’t support a lot of the new technology that allow developers to make better and more powerful web applications. As such, removing IE7 support allows us to develop Engage to leverage off the latest technologies.

IE7 users will still be able to log in and we will continue to fix any major bugs that affect basic Engage use, however any new features we add may not function or display correctly.

Public elements such as forms/surveys/events will continue to work in IE7.

If you are using Engage in IE7 it is recommended you upgrade to one of the supported browsers.

Reordering in Engage now uses drag and drop, rather than the up and down arrows that were there previously.

To reorder questions and logic in the form/survey/event designers, you can just grab the question with your mouse and drag it to reorder.

For question options, such as on checkbox and radio button questions, you’ll see a new drag handle beside each option.

When you add a ranking question, there is now a new option in the Field Type dropdown for ‘Draggable list’.

Choosing this field type changes the ranking question to be drag and drop with items on the left side that can be dragged and dropped onto the placeholders on the right side.

If JavaScript is disabled in the respondents browser this question type will fall back to the standard radio button ranking method.

Note: this feature was originally scheduled for the 1.76 release.

Don’t Know options in Engage allow you to add exclusive options in a multi-select list. 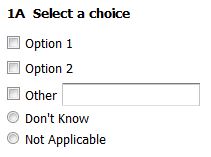 Previously you could only have one Don’t Know option for each question, however we found this was often restrictive.

For example, you might want to have options for “Don’t Know”, “Not Applicable” and “I don’t want to say”. Respondents should be able to either answer the question normally, or choose only one of these options instead.

Now you can add multiple don’t know options to each question. You can also define the response values for these options which are used when downloading responses.

Save Button for Save & Resume

Previously, when a survey had save and resume turned on it was only every time a respondent clicked next that their response would get saved. This meant that respondents couldn’t close the survey with a half-completed page and still keep their answers.

Now they can. When your survey has save and resume turned on, a setting will appear on the settings page that allows you to show a save button on your survey. Respondents can click this save button at any time to save their survey progress so they can resume their page at a later time.